Phone and chat support may be limited from Thursday, 11/24 through Friday, 11/25 as we observe the Thanksgiving holiday. You can still access your account and apply for quotes online.

By Insureon Staff
Updated: May 3, 2022
The cost of your business's workers' compensation insurance varies state by state.

Continue reading to learn more about states with high and low rates for workers’ comp, how those rates are calculated, and steps employers can take to keep costs down.

You can also start a free online application to compare specific quotes for your business and location with Insureon.

How are workers’ comp rates determined?

Every state has its own requirements for workers’ compensation, and each state has a rating bureau that sets the baseline cost (or rate) used in calculating how much you’ll pay in insurance premiums. In general, a state’s rates are based on a combination of the following:

While some states have established their own rating bureaus, most rely on the National Council on Compensation Insurance. NCCI is a private company that gathers workers’ comp data, analyzes trends, and makes rate recommendations to states.

In most states, you have the option to compare quotes with private insurance carriers or a state workers' comp fund. However, North Dakota, Wyoming, Ohio, and Washington only allow businesses to purchase a policy through a workers’ compensation state fund.

Choose your state to learn about workers' compensation insurance requirements for your business. 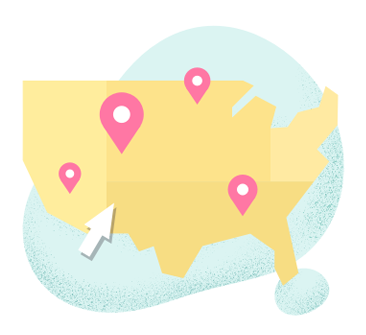 What states have the lowest (and highest) workers’ compensation costs for employers?

The National Academy of Social Insurance recently published a study that compares employer workers’ compensation costs by state in 2019 (the most recent year with available data).

The methods used for estimating employer costs vary based on whether insurance is provided by a private carrier or state fund, and several factors are used to calculate costs by state. These include:

The report shows a downward trend in employers’ overall workers’ comp costs. The costs per $100 in covered wages declined in 48 of 51 jurisdictions, compared to decreases for 44 states in last year’s report.

The lowest workers' comp costs by state jurisdiction are:

The highest workers' comp rates by state jurisdiction are:

A state’s mix of industry risk as well as changes in state workers’ compensation laws that affect covered benefits or medical costs can cause a state’s employer costs to rise or fall. Negotiations between legislators, business lobbies, insurance companies, and unions on workers’ compensation benefits can also impact costs.

For example, in 2013 North Dakota made significant changes to their workers’ comp laws, including tightened restrictions on benefits. As a result, the state’s employer costs declined about 30% from 2015 to 2019.

While employer costs vary widely among states, this doesn’t mean that a state with lower employer costs will offer a more favorable climate for your business. A state’s costs depend on a number of considerations, including the mix of high-risk and low-risk industries.

For example, Alaska’s top industries include oil and gas, construction, and fishing. These high-risk professions mean higher overall employer costs – but it doesn’t mean that a low-risk business like an accounting firm would pay more for workers’ comp coverage in Alaska than another state.

Which region has the lowest workers' comp costs?

Each region of the United States has states with low and high costs. For example, although California has one of the highest rates for workers’ compensation insurance at $1.61 per $100 in employee wages, the states that border it (Arizona, Nevada, and Oregon) all have costs at $1.00 or less.

Although each state’s specific formula for determining workers’ comp rates may be a little different, they follow the same general guidelines.

How can you estimate your workers’ comp costs?

Workers’ compensation insurance is required for most businesses in most states, so it’s an expense that must be calculated into your budget if you have employees. Timing is also important when buying worker’s comp coverage.

Most states re-evaluate workers’ compensation rates on an annual basis. Although each state’s specific formula for determining workers’ comp rates may be a little different, they follow the same general guidelines.

For business owners, the amount you will pay in workers' compensation premiums depends on:

Review requirements and rates for workers’ compensation insurance in your state, or speak with one of our expert insurance agents who are licensed nationwide and happy to answer your questions.

How can you keep your workers’ comp costs down?

While you can’t control the level of risk in your industry, there are steps you can take to help lower your workers’ compensation costs.

These workplace safety tips can help reduce the frequency and severity of workers’ compensation injuries at your small business:

If one of your employees suffers a workers’ comp injury, a return-to-work program can help speed their recovery and get them back on the job faster.

Instead of waiting until an employee is recovered enough to resume all of their full-time job duties, a return-to-work program that allows them to perform light or modified work can ease them back in slowly.

These programs may also include retraining employees on a different skillset so they can earn their full pre-injury pay, instead of the partial wages paid under workers’ comp.

When employees come back to work sooner, you save money on wages paid to any temporary employees you had to hire while your injured worker was recovering.

Insurance can be a tricky thing to navigate on your own, which is why our industry-trained insurance agents do the hard work for you. We're already familiar with your state's workers' comp laws and can provide a free consultation to help you find the insurance policy that complies with those regulations.

Complete Insureon’s easy online application today to compare insurance quotes from top U.S. carriers. Once you find the right policy for your small business, you can begin coverage in less than 24 hours.

RELATED POLICIES FOR YOUR BUSINESS