Photography and Videography Business Insurance
Compare multiple quotes from top carriers with one application.
What kind of work do you do?
Or call us at (800) 688-1984

Learn about business insurance requirements and the most common policies for photographers and videographers in New York.

Which policies are required for a photographer or videographer in New York?

If you have a commercial lease, your property manager may require you to purchase general liability insurance. It's the most common policy purchased by photographers and videographers in New York because it can protect your business from expenses associated with common mishaps, such as client property damage and injuries.

Your clients may require professional liability insurance in a contract. This policy, also called errors and omissions insurance, provides financial protection if a client files a lawsuit claiming your work was late, erroneous, or incomplete.

What are the most common policies for a New York photographer or videographer?

The most common policies for photographers and videographers in New York vary depending on revenue, client contracts, partnerships, and other factors.

General liability insurance is the foundation of a photographer or videographer’s business protection, with coverage that extends to client injuries, client property damage, and advertising injuries. Most commercial leases require you to have this coverage.

Photographers and videographers sometimes qualify for a business owner’s policy. This package helps your business save money by bundling commercial property insurance with general liability at an affordable rate.

If you own a photography or video production business in New York that has employees, you are required to carry workers’ compensation coverage. If you are a sole proprietor, the coverage is optional. However, if you trip over a light stand and break an arm at your studio, or develop a repetitive stress injury from your work, you can turn to your workers’ comp policy to help pay your medical bills and lost wages.

What do photographers and videographers in New York pay for business insurance?

According to an analysis of Insureon applications, photographers and videographers in New York can expect to pay roughly $425 annually for general liability coverage. This is the same as the U.S. median cost. A business owner's policy will cost nearly $550 per year, which is a little higher than the national annual median cost. The median annual cost of errors and omissions policies is also slightly higher than the national median, costing New Yorkers $390 versus the $340 national median cost. 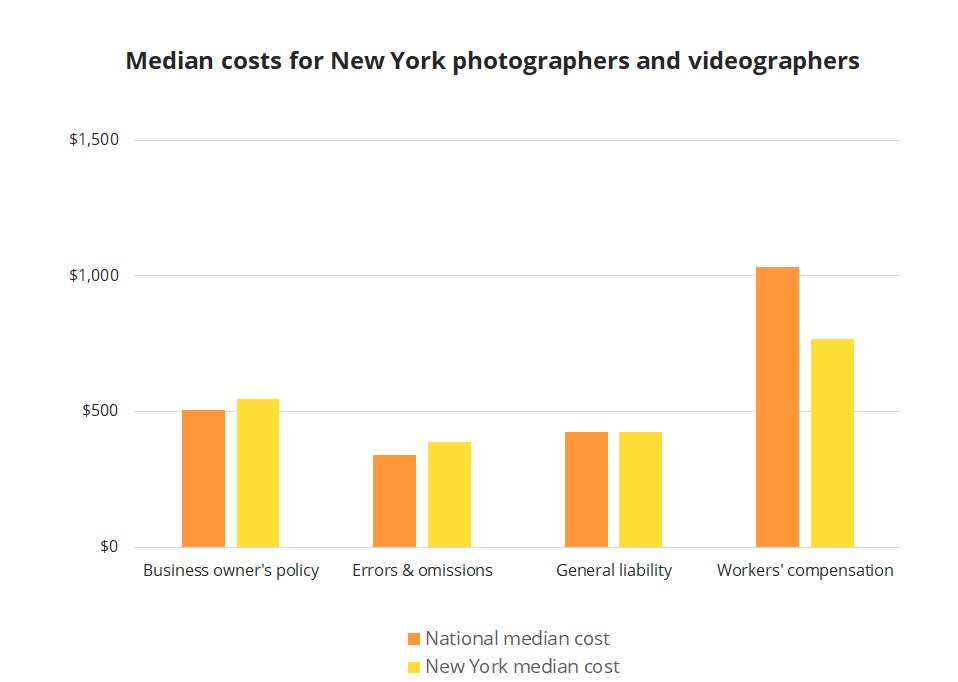 Save time and money with Insureon

Insureon’s industry-leading technology helps photo and video professionals in New York save time and money shopping for insurance by comparing policies from top U.S. carriers. Start a free online application to review quotes for the policies that best fit your business. Our insurance agents are licensed in New York and can answer your questions as you consider coverage.

To make the application go quicker, have this information ready:

Don't see your profession? Don't worry. We insure most businesses.

Compare quotes for photo and video businesses
Save money by comparing insurance quotes from multiple carriers.
What kind of work do you do?
Or call us at (800) 688-1984
EXPLORE ON INSUREON
Business insurance requirements in New York Common questions about certificates of liability insuranceWhy your camera gear isn’t covered by your homeowner’s or renter’s insuranceFilm equipment insurance might be cheaper than you thinkHow to become a Certified Professional Photographer
TOPICS
SHARE THIS ARTICLE